The Super Bowl 2023 is fast approaching, and we cannot wait to see the Rams facing off against the Bengals. Two teams no one expected to see at the Super Bowl before the post-season games. But, here we are.

Many of us will be taking to Fanduel.com to place our bets on whom we think will be taking home the Lombardi trophy this year, and who won’t. Let’s not forget those prop bets, and futures.

However, before we get all bogged down talking about the 2023 Super Bowl, and the bettors’ excitement that comes with it, we want to remember that there is more to the NFL than just the Super Bowl.

By this we mean, rivalries. Every team has a rival, and every team will fight like hell against their rivals. For the Rams, their long-term rivals have been the 49ers, and there has been much fun and drama with this rivalry.

Funny enough it began before the merger, and has continued on since.

Let’s look into this rivalry, and know a little more about the team you might be betting on in a few weeks.

The History Behind The Rivalry 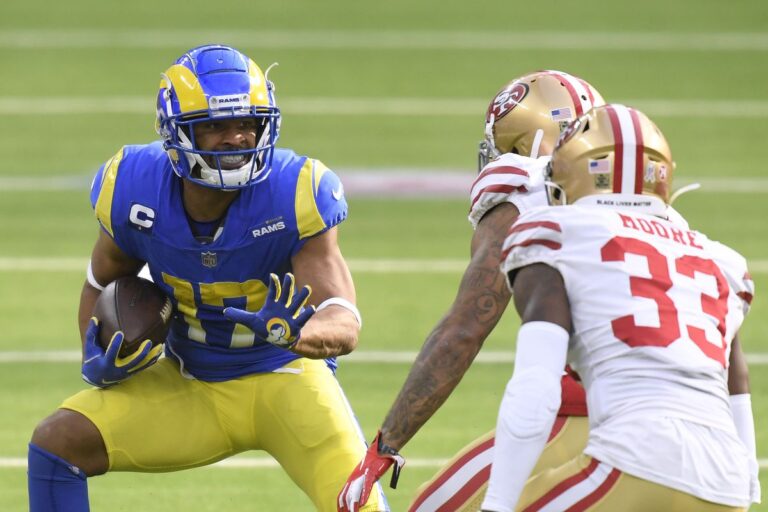 The rivalry between the Rams and 49ers began in the 50s. Despite how many other teams have harsh rivalries this one became one of the most intense in the league, thanks to how in the 70s these two were often fighting it out for the division title.

However, geography has played a part in their rivalry too, as many know Northern and Southern California have long been competitors in every area, be it political, economic, or yes, in football.

The Rams and the 49ers also are the only teams in the NFC that have been a part of the NFC West division since it was formed back in 1970 with the merger.

The Rams dominated for the first three decades, leading by 22 games, however, the 49ers had a comeback in the 80s and 90s, and so they have had a fair share of victories.

The 49ers hold the longest win streak with 17 wins, while the Rams have 10 wins. However, today that doesn’t matter, not since the Rams are heading to the Super Bowl.

The rivalry between the two franchises started early, but in the 60s it was mostly equal. The Rams held a 10-9-1 edge, and the 49ers were also-rans as well, although the Rams did not contend until later in the decade.

But after the merger things heated up, as both the Rams and the 49ers were placed in the NFC West, and they were the only teams required to be in this division by the merger agreement. From ‘70 to ‘79, one of these two rivals won the division every season.

The 49ers were the division’s top franchise at the beginning of the decade, but the Rams came back winning 7 division crowns from ‘73 until ‘79.

While much happened for both teams in the 80s, even more, happened in the 90s. The 80s saw the 49ers hitting it hard while the Rams were underdogs. However, along came the 90s and the 49ers continued, they won 17 games straight against the Rams and won another Super Bowl.

When the Rams relocated to St. Louis in ‘95, many thought it would be the end of their rivalry, however, many did not believe so, including the players. It did not matter that they relocated. If they had played their home game on the moon, it would still be a rivalry.

By ‘98, the 49ers led the all-time series for the first time, and the Rams were still not doing so hot.

However, the 49ers’ lead did not live long.

The Rams ‘Great Show On Turf’ offense gave them an upper hand in the 00s, and they won 6 times straight against the 49ers. They started winning again against their rival. However, by the time the decade came to more of a close, neither team was hot to trot.

During 2002, the Rams and 49ers were the only teams in the NFC West, while they awaited their new NFC West franchises, the Cardinals and the Seahawks.

In 2016, we saw the Rams return to LA, which restored the rivalry even more. This same year the Rams were the only team to lose to the 49ers, which meant at least the 49ers kept face. Even though they ran 0-14 against the rest of the league.

By the end of the 2010s, they had each won one conference championship to close the decade, but neither the Rams nor the 49ers won a Super Bowl.

In 2023, the 49ers won both of their meetings with the Rams, including in the season finale. The Rams were already in the playoffs, but they knew they could steal the division title with a win, but the 49ers needed a win to make it to the playoffs at all.

The Rams led at first but the 49ers bounced back, stealing the playoff spot they wanted. However, the Rams still won the NFC West as the Cardinals lost their final game.

And now, this year, we saw the 49ers and Rams meet again. The Rams defeated them 20-17, even though they slacked in the fourth quarter. However, now the Rams go to the Super Bowl, and the 49ers chill out at home.