The NBA has plenty of awesome teams and one of these is the Oklahoma City Thunder, they have been around since 1967 and play in the Northwest Division of the Western Conference.

When looking at which teams are NBA finals favorites, looking at the history and specifics of a team is very important. The Thunder’ are a very popular team, they have a great history, but in recent years could have seen more success.

If you are thinking of betting on the NBA, and the Oklahoma City Thunder sounds like a good shout, Fanduel.com can help you decide if this is the right decision for you.

Who Are Oklahoma City Thunder?

The Oklahoma City Thunder is a pro basketball team that is based in Oklahoma City competing in the NBA. They play home games at the Paycom Center.

They are the only team in the major pro North American leagues that are actually based in Oklahoma, and Oklahoma City even hosted the New Orleans Hornets for 2 consecutive seasons after the destruction caused by Hurricane Katrina.

Originally, they were established with the name the ‘Seattle SuperSonics’, when they were an expansion team which joined the NBA in the 1967 to 1968 season.

However, the SuperSonics moved from Seattle to Oklahoma City in 20008, as a settlement was made between the ownership group and lawmakers in Seattle, after a lawsuit.

In Seattle the SuperSonics made the playoffs on 22 occasions and won their division title 6 times, winning 3 NBA Finals and winning the Championship in 1979.

They qualified for their first playoff berth in the ‘09-’10 season and won their first division title with their new name in the ‘10-’11 season, with their first Western Conference titled in the ‘11-’12 season, and appearing in the Finals for the 4th time in the history of the franchise, and the 1st since ‘96, when they were Seattle-based.

Sadly, they are still yet to win a championship since they moved to Oklahoma.

The Oklahoma City Thunder has a rich history, mostly as the Seattle SuperSonics, but it is still a history worth knowing!

Back in 2006, the former owner of Starbucks, sold the SuperSonics and its associated WNBA sister franchise to the Pro Basketball Club LLC, who are a group of investors.

The sale of the franchises was NBA approved the October after, and in 2007 it was announced that the teams would move to Oklahoma City as soon as their lease with the KeyArena expired.

Then in 2008, a lawsuit which had been brought about by Seattle against Bennett (the lead of the investors) went to break the two years of the lease by the Sonics’ went to court, and a month later the two sides made an agreement.

In September 2008, the logo, name and colors for the Oklahoma City Thunder went public, and the name was revealed to have been chosen in reference to the location of Oklahoma in Tornado Alley. And the City as the U.S. Army’s Infantry Division: The Thunderbirds’ home.

The Thunder played a few preseason games before the ‘08-’09 regular season, while the season got better, they were still not good enough to affect the NBA playoff odds.

After their inaugural season that was packed with adjustments, the Thunder tried improving their second season, they did not make any major changes in the off-season. They made trades and selections and by the end of 2009 they had a young team.

With the leadership of Durant and the young players slowly growing in experience, there was some improvement.

For the first half of the season they gained .500, but later went on to achieve a 9 game winning streak which took them to the playoffs. In April 2010, the team got their first playoff in Oklahoma City when they defeated the Lakers – who were the defending champions.

The Thunder ended up winning the series 4-1 and faced the Grizzlies, they got to the Conference Finals, but they ended up falling to the Mavericks.

In the playoffs of 2012, the Thunder defeated the mavericks and faced the Lakers, defeating them in five games, advancing to face the Spurs. They lost 2 games against the Spurs but won the next 3, eventually defeating them and going to the Finals.

They ended up winning their first Finals game against the Miami Heat, but then losing 4 consecutive games.

Then from 2014-2016 the team saw a lot of chaos, and Durant went downhill. But the team missed the playoffs in 2015. However, in 2016 they made it to the Conference Finals after winning the Division, still losing to the Warriors in the end, however.

There was still much speculation around Kevin Durant, and then he said he was leaving to join the Warriors, but Westbrook agreed to a 3-year extension to stay with the Thunder and while they lost the playoffs, they still made it to the playoffs in this year.

This era was the era of Westbrook and George. The Thunder finished this season with a 48-34 record, but lost to the Jazz in the first playoff round.

Then in 2018, they re-signed Paul George, as well as acquiring others such as Denis Schroder and so on. 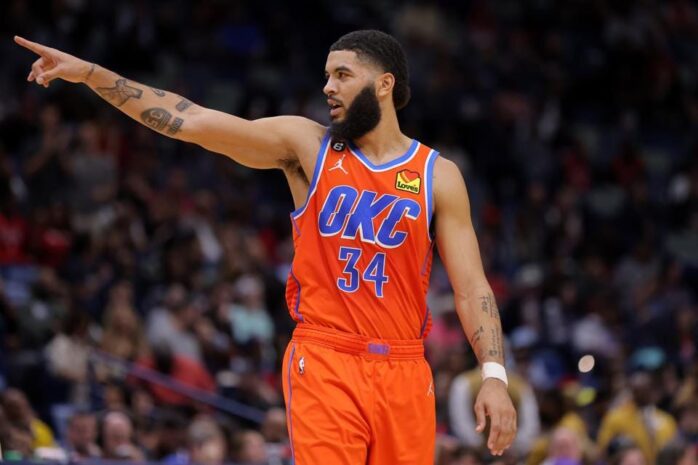