Skateboarding is an interesting sport. Let’s call it that for now. Many people would disagree, and they have the right to do so. Everyone has the right to have an opinion. But, for us, it is a sport. Yet, many people all over the world dismiss the notion. It’s not like it’s anyone’s business, but arguing whether skateboarding is a sport or not is quite common. To argue about an activity is a sport or not you need to have facts on your side. So, we were curious why do some people consider skateboarding not to be a sport?

There’s not a definite answer, as you could have guessed, but there is plenty of argument about it. We weren’t lazy and after a couple of hours scrolling down the web, we have a few notions that answer the question. Still, we beg to differ from what people think about it, in a negative light, as if it’s accepted at the Olympics, how it is not a sport? Furthermore, there are plenty of competitions all over the world in this discipline with people competing and big sponsors such as Nike or Monster covering the scene.

So, you have people competing in it, there is a World Skateboarding Championship, and the sport itself was inducted into Olympics. This is a massive recognition that should have shut the critics down. Also, you have a massive industry covering the sport. Many companies are into manufacturing boards and various other equipment such as Cardiff Skateboard Club abbreviated as CSC and many others. Everything you see and hear about skateboarding screams that it is a sport. You know how they say – if it walks like a duck and it sounds like a duck and it has feathers like a duck it is a duck. The situation is similar here, so why is there an argument? Let’s see.

People See It as a Hobby

There’s nothing strange in seeing skateboarding as a hobby. After all, it can be one for many people. It is an activity that can be consumed strictly as a hobby. Many youngsters indulge themselves in this activity without really ever trying to compete or make a career out of it. This is why it’s seen more as a hobby than a sport by some people. You won’t find too many kids out there wanting to be new Tony Hawk while every other kid wants to be a Tom Brady or LeBron James. While this argument can hold water for a little while, you can see its flaws. Tony Hawk is a big name in the sports industry. Yes, his name is toed to sports. He was a great competitor and made a name for himself by being a skateboarder. The man even has a game series created based on him called Tony Hawk’s Pro Skater. So, while it can be a hobby it can elevate your status to be a living legend.

There Are No Rules

This is what makes the argument strong for some. Yes, there are no strict rules regarding skateboarding. Many of the sports that we love and follow are played under a strict set of rules. Let’s use NFL as an example. The rules are clearly defined and every player on the field needs to know them. This part lacks in skateboarding. In this domain, it’s closer to art as it allows the skater to be as expressive as one like. Not only that it allows him that it’s also desired. There aren’t many sports in the world that are not played by the rules. Skaters compete against each other but each has its turn it’s never one against the other directly nor there’s group competition. All of this makes it less of a sport for many people. While the WC is a massive event with a lot of judges and a true competitor spirit involved it just doesn’t break it for some.

We can’t argue that skateboarding has a great commercial appeal for many companies. From the start, the situation was like this. Skateboards, hats, distinctive ways of dressing, it all made a skater what he is. If you wanted to associate yourself with this sport you needed to look like it. It’s no different right now. The thing is many people would argue that at first, it was all about making a profit out of skateboarding before anyone thought about calling it a sport. So, you had the activity, you had the merchandise, the lifestyle it was just that there was no one competing or anything. It took a while before it became an official sport. Even today the competition is heavy between manufacturers who will make more selling merchandise. While it was a business long before it became a mainstream sport, it’s no reason not to see it like one right now.

There’s No Training; No Coming Through the Ranks

This is a strong and partially truthful argument regarding skateboarding and sports. You don’t need any training to become a skateboarder. You only need aboard. With even an ounce of talent, you’ll learn how to ride it. Yes, you’ll be unable to perform big tricks but who cares, right? Many people take this against skateboarding as a sport. There’s no training involved. It is not incorporated in schools and colleges. It’s even been banned from many schools due to safety reasons. So, there’s no coming through the ranks, youth competitions, before going to the pros. You are able to compete as a skateboarder at a very young age and when you’re older but the sport is generally associated with a younger population. You can learn it as a kid and practice your whole life to be a pro. But, at the end of the day, it doesn’t require years of dedication, rigorous training, and renunciation.

As you can see there’s a real argument for some to deem skateboarding, not as a sport. Like we said at the beginning, everyone is entitled to an opinion. We’d love to hear yours below in the comment section. 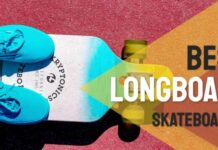